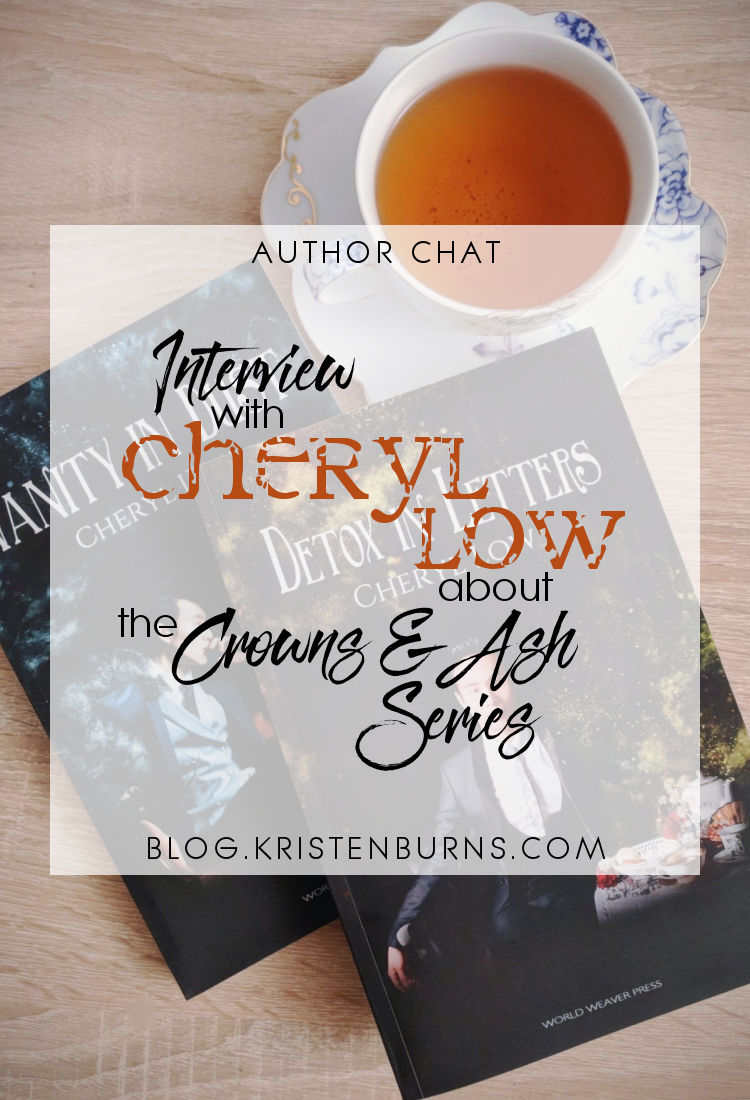 The Crowns & Ash series has easily become one of my favorites after only two books, what with its unique, decadent fantasy setting and its complex, interesting characters, so I was delighted to be able to interview the author, Cheryl Low!

I’ll spare you from more raving because you can read my reviews if you want to hear about all the things I LOVE, but I will say that if you’re not already reading this series, you should absolutely start because it’s amazing. And whether you’re already a fan or not, hopefully you’ll find Cheryl’s answers to my questions just as interesting as I did, and maybe they’ll convince you to give these books a try (or a reread)!

*Credit for the lovely photo in the featured image above goes to Cheryl Low. Used with permission.* 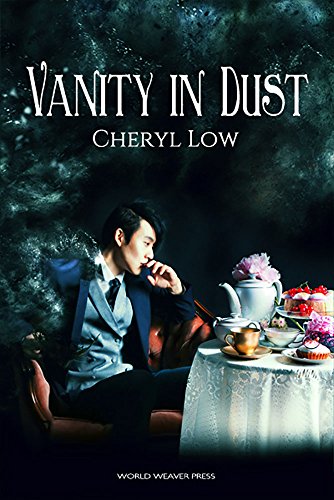 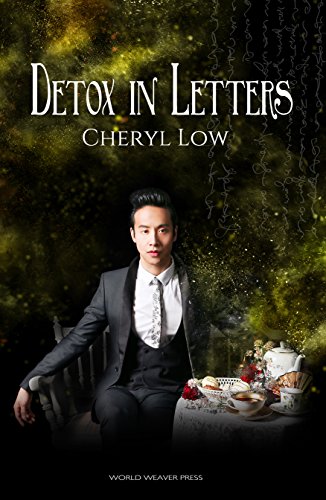 In the Realm there are whispers. Whispers that the city used to be a different place. That before the Queen ruled there was a sky beyond the clouds and a world beyond their streets.

Vaun Dray Fen never knew that world. Born a prince without a purpose in a Realm ruled by lavish indulgence, unrelenting greed, and vicious hierarchy, he never knew a time before the Queen’s dust drugged the city. Everything is poisoned to distract and dull the senses, even the tea and pastries. And yet, after more than a century, his own magic is beginning to wake. The beautiful veneer of the Realm is cracking. Those who would defy the Queen turn their eyes to Vaun, and the dust saturating the Realm.

From the carnivorous pixies in the shadows to the wolves in the streets, Vaun thought he knew all the dangers of his city. But when whispers of treason bring down the fury of the Queen, he’ll have to race to save the lives and souls of those he loves.

Welcome to the Realm, where magic is your drug, your poison, and your only hope.

An illness is spreading through the city, marking the sick in mysterious letters scrawled across their skin. What is first thought to be madness reveals itself to be an awakening as residents rediscover themselves, their pasts, and their long-forgotten magic… things the Queen wants to remain buried. Things she will sacrifice her own children to suppress.

Mercy has never been a staple of the Realm. Treachery, blood, and magic steeps the city as the rebel leader, Red, seeks to topple the Tower, Princess Fay eyes her mother’s throne, and Prince Vaun must decide whether to submit to his mother’s terrible demand.

Hi, Cheryl, and welcome to the blog! One of the things that stands out most to me about your Crowns & Ash series is how unique it is. So my first question is, did the idea for this story come from anywhere in particular, and/or how did it evolve into what it is?

Hi, Kristen! Thank you for having me and for taking an interest in the Crowns & Ash series.

I came up with the world before I had characters or a story. I kept it in my imagination for a couple years, playing with the ideas and making notes before ever writing any of it. I wanted to make a fantasy world with modern themes, someplace dark and overly indulgent but beautiful, and hinting at fairytales. It all started with the city under clouds, a queen no one ever saw anymore, and wolves sent out to snatch souls. Since then, I’ve tried to look at everything in our world and figure out how that would, or wouldn’t, work in the Realm.

A fantasy world with modern themes is the perfect description. It makes for such an interesting combo! The way the Realm is split up is another unique aspect of it, can you tell potential readers a bit about that?

Of course! The Realm is one large city with the Queen’s Tower at the center. The rest is divided into three provinces, each stretching from the Queen’s Tower down to the Ash, a valley of charred ruin that encircles the city. The High districts are at the very top, closest to the Queen and home to the upper class. The Main districts in the middle mostly house the working class and magic factories as well as offering shops and clubs of their own. And the Low districts are the slums at the bottom, pressed up against the Ash and farthest from the Queen. As far as the people of the Realm know, there is nothing beyond their city and until very recently, they’ve believed that this extreme set up is how it has always been.

If you could live in any section of the realm, which would it be, and why?

Oh, that’s a hard question! I want to say Belholn, because everything there is a little more gritty and extreme but that’s exactly why I wouldn’t cut it. Maggrin is too strict. I’d definitely go with Vym and drink tea at The Library. Maybe even spy on Princess Fay…

I would choose Vym too, based on what I’ve seen so far. They seem like the most pleasant of the families. One thing that intrigues me about the Realm is how different relationships are and how normalized LGBT+ relationships are. Is that something you knew you wanted to include from the start, or did that come about as a product of the world as you created it?

I knew from the start that I wanted the characters of the Realm to have multiple complicated relationships. Most live very long lives and spend a great deal of their time developing friendships and romances at clubs and parties. They aren’t prone to jealousy, almost no one is monogamous, and they have no concept of sexual orientation. They simply fall in love or lust with whomever they’re drawn to and don’t give it much more thought than that.

I love that! But enough about the Realm, let’s talk about Vaun! He’s a very complex and multidimensional character who has already shown a lot of growth. I’m curious, which is your favorite to write—his kind of silly, superficial side, or his more serious, compassionate side?

Vaun is an incredibly enjoyable character to write! He’s very silly at times, completely shameless, and doesn’t take himself too seriously. He loves deeply, deeper than even he expected, and has discovered a sense of responsibility for the people of his city. While I think writing his superficial side is the most fun, writing his true emotions are more gratifying. It’s then that he gets to grow as a character and hopefully the readers get to know him better.

I don’t know if authors are supposed to choose, but… who’s your favorite character in the series? (If it’s Vaun, who’s your second favorite?)

Fay. I don’t know if we’re supposed to choose favorites either, but it’s Fay. I adore these characters, but she had me from the start when she was dressing like a widow from the day she married. Writing her almost always makes me smile. She’s powerful, willful, and bold, with a serious flair for the dramatic.

Fay is fierce! Total #GirlPower and #WorldDominationGoals. Any plans to write companion novels or short stories about any of the side characters? If so, I vote for Samuel Sinol. That man has some interesting secrets, I just know it.

I’ve played with some ideas for companion novellas, possibly predating the Crowns & Ash series, but nothing concrete or written. I’ll definitely keep Samuel Sinol in mind! Right now I’m focused on finishing the series. I just wrote the rough draft for the fourth novel which is so exciting to write but so frustrating when it comes to not telling anyone what happens.

I can imagine! Speaking of the rest of the series, it seems to me that the stakes are rising and things were more intense in Book 2 than they were in Book 1. Is this a pattern that’s going to continue?

I really hope so! I want this story to be thrilling. As the Realm changes, we’re going to see more pushback from different groups, as well as from the Queen herself. More magic is coming into play and more secrets and monsters will make their way into the streets.

Last but not least, do you have any specific writing process, and how much tea-drinking does it involve?

My writing process does involve A LOT of tea and sometimes coffee. I usually write my first drafts in a burst. One book takes about a month to write but it’s a hot mess and I then throw it on the stack to be edited later. So really, I spend most of the year editing and revising projects. I have playlists for different stories (and even some characters), Pinterest boards for inspiration, special lights over my desk that I turn on when I’m working, and a big calendar to keep track of my goals.

Now for Some Fun… The Lightning Round!

Favorite paranormal creature is probably a dragon… or mermaids.

Favorite genre to read is fantasy.

Thank you again for doing this interview with me! Is there anything else you want to say to your current and potential readers?

It was my pleasure! Thank you for having me!

To anyone who has taken the time to try one of my books or even put it in their ‘to be read’ pile, thank you. This project is an obsession of mine and it is thrilling to get to share it with others. I hope you enjoy it! 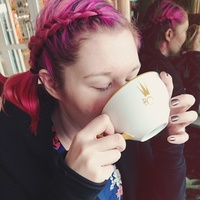 Cheryl Low might be a dragon with a habit of destroying heroes, lounging in piles of shiny treasure, and abducting royals—a job she fell into after a short, failed attempt at being a mermaid. She can’t swim and eventually the other mermaids figured it out. She can, though, breathe fire and crush bones, so being a dragon suited her just fine.

…Or she might be a woman with a very active imagination, no desire to be outdoors, and more notebooks than she’ll ever know what to do with.

Find out by following her on social media @cherylwlow or check her webpage, http://CherylLow.com. The answer might surprise you! But it probably won’t.

Do you have any more questions for Cheryl?
Do you like unique fantasy settings?
Which part of the Crowns & Ash series sounds most interesting to you?

Book Review: The Tale of the Body Thief (The Vampire Chronicles Book 4) by Anne Rice 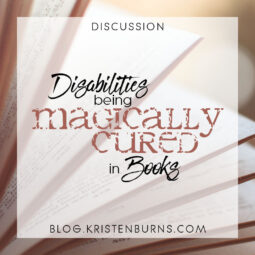 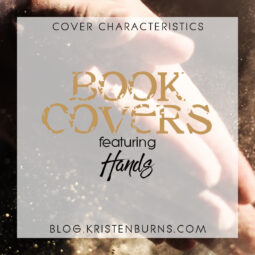 28 thoughts on “Author Chat: Interview with Cheryl Low about the Crowns & Ash Series”