As a gargoyle, Jet's life used to consist of sitting on a building every day, but now he has Matthew and Samantha making things much more interesting. When Samantha insists they have to stop Krampus from ruining Christmas, Jet is ready to help, but first they'll have to convince Tarrick to help too. 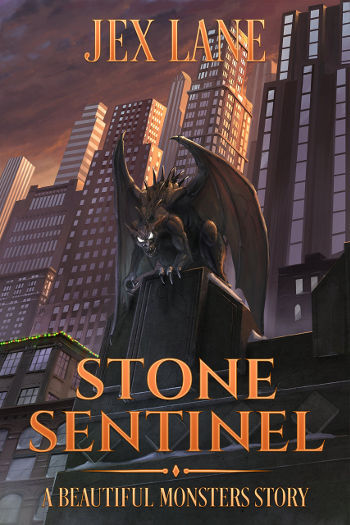 I guess I’m the odd one out since everyone else seemed to love this book, but I’m generally not a big fan of extra novellas/shorts in the middle of a series that are told from a side character’s POV. But I saw it noted somewhere (I thought it was in the blurb, but it’s not there now, so I’m not really sure) that this one is necessary if you want to understand everything in the series, so I read it anyway. Was it necessary? Without having read the whole rest of the series, I don’t know. It might add something, but it’s probably not absolutely necessary.

Anyway, it was a fun idea writing this from the POV of Jet (a gargoyle), but one issue I had was that the voice felt off. Sometimes it sounded childish, other times it sounded mature, the word choices didn’t match up with each other, etc. It kept distracting me from the story in the beginning. But once the story picked up more, it kind of evened out because the writing got more focused on the actual stuff happening rather than Jet’s own thoughts.

This author’s portrayal of gargoyles is pretty cool though! They’re a very not-human type of gargoyle, so it was neat getting to learn more about them, their lives, and their abilities. That was my favorite thing about this novella.

I also loved Sam’s diatribe against Tarrick because I feel the same way. I’ve warmed up to Tarrick a bit, I see some good in him, and I do kind of ship him and Matthew, BUT I still don’t know if I forgive him for the things he did, and I still feel like Matthew’s love for him is more like Stockholm Syndrome. I was glad to see that those things weren’t actually overlooked, that other characters feel the same way even if Matthew doesn’t.

Overall, this wasn’t as Christmassy as I thought it would be from the blurb, and I can’t say it’s my favorite in the series, but it wasn’t bad. Learning about the gargoyles was interesting, and I’m sure plenty of people will love the chance for a fun, quick trip into the series from a side character’s POV.

Fans of Books 1-3 in Jex Lane's Beautiful Monsters series. Anyone who likes vampires, incubi, sex, and violence, plus some emotional conflict and touching moments.

Have you read Stone Sentinel by Jex Lane?
Do you like novellas in a series that are from the POV of a side character?