Wyatt, a trans witch, is finally living a nice life with a family who took him in after he escaped fae society years ago. But then his betrothed, the prince, shows up and brings him back under threat of the blood contact that binds them, and Wyatt will have to decide how far he's really willing to go to get back to the human realm. 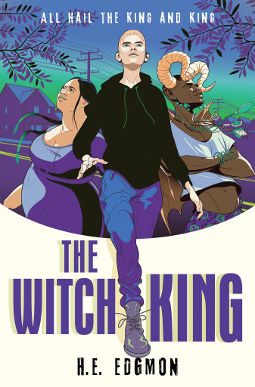 I liked this! For a lot of reasons, which I will now explain because that is how reviews work, and I don’t feel like figuring out an intro paragraph. (Heads up, if I spell names wrong, it’s because I listened to the audiobook.)

Wyatt was a very relatable character. Usually the thoughts he was having in reaction to situations or other characters were the same thoughts I was having or would be having in those situations. He had a lot of attitude and sass, but not so much that it was unbearable or unlikeable or putting his life in more danger (well, usually).

Wyatt also had a great voice. The 1st person POV worked super well here. Sometimes a sort of casual, super close, almost breaking the fourth wall kinda voice can go poorly, but this hit the mark. Will teens actually like it? I don’t know, I’m not a teen. But I thought it was good and made his personality shine.

I liked Briar too. She was there for Wyatt. She spoke up when something wasn’t ok in a situation. I feel like there were some other specifics I can’t remember, but I just know I liked her.

Emyr was someone I disliked at first, because he was forcing Wyatt to come back, but I grew to love him, just as Wyatt did. I mean, Wyatt already loved him, but he went from anger to realizing Emyr was pretty great. Throughout the whole book, he always tried to understand Wyatt’s feelings and where he was coming from and to adapt and offer Wyatt what he needed. He didn’t think he was better than others just because he was fae. He was genuinely a good guy. Also his fashion sense was top notch.

I enjoyed the trans rep. There are all different ways trans people can feel about their bodies, and Wyatt’s feelings were that he was alright with his. He wore a binder, but he didn’t have dysphoria. He felt like, he’s a boy, and this is his body, therefore it’s a boy’s body.

The story was good. It kept me hooked.

This was an interesting magic system and take on fae. Fae have specific categories of magic (healers, influencers, and feelers), whereas witches don’t. Also the fae have horns and wings, though all the horns and wings look different, which is just fun.

The audiobook narration by Dani Martineck was great! It sounded so natural, and it perfectly captured the casual, relatable style of the writing and the bit of attitude Wyatt had.

Overall, this was a great story full of fae and witches and magic and trans rep and likeable characters and friendships and romance, and I’m looking forward to more!

Anyone who likes YA, fae, relatable teen main characters, distinct voice, trans rep, and good guy princes you dislike at first but grow to love.

Have you read The Witch King by H.E. Edgmon?
Do you like it when the main character in a book actually has the same thoughts as you about the situations they're in?

Art Book Review: Castlevania – The Art of the Animated Series