Sims Shenanigans: My Supernatural Sims House Update (2) (AKA The One in Which I Let All 8 Sims Loose at the Carnival)

Yay, time for another update! I think you all are going to like this one. It’s a fun one. I also have one last sim to introduce (there won’t be any more since eight is the limit in the game). Annnnd I even have a little treat at the end for my Jacovine fans 😉

Also, I changed my graphic settings in the game (after the pictures for this post were taken), turned some of them down to compensate and turned the sim detail all the way up, and WOW. I’ve been missing out! So I took new pics of them for the little reference graphic below because I’m obsessed. I don’t have kids or pets, these are now my babies, haha. But gah, I love how much all the details stand out, like Pin’s freckles, Matthew’s piercings, and Kreljoen’s cleft chin and bent nose <3

And in case you need the reminder or missed them, here are the previous sims posts:

I also made a thing since there are a lot of names to remember (you can see it bigger if you click):

Side note: Is that not the most perfect facial expression for Jacobin?! And Matthew looks so mischievous, I love it.

This is Kreljoen, the brave, ‘night owl’ merman. (I’ll get a picture of his tail for you all at some point… when I decide what colors I want it to be lol.)

Hurrah! Hurrah! Romance is in the air yet again! Jacobin needed to get out of the house, so he and Levine went to the art museum one night. I figured Levine would like it since he loves art. He didn’t seem to like many of the paintings though. Afterward, they decided to go swimming in the ocean. After splashing around a bit, they got to flirting, and then *blows trumpet* they finally kissed! (Truth be told, Jacobin was very impatient and just kept trying to sleep with him. I had to X out the “woohoo” action like four times. I was all, “Compliment him,” and Jacobin was all, “And then have sex!” And I was like, “No, Jacobin, then flirt with him,” and Jacobin was like, “And now have sex!” And I was like, “STOP IT, YOU HAVEN’T EVEN KISSED HIM YET.” *sigh*)

Also, now that they’ve finally admitted their feelings, Levine is drinking from Jacobin’s neck, and I dare say they are both enjoying it immensely 😉

In other relationship news, I love how much Matthew seems to love Elliott regardless of his ridiculous werewolf antics. He just looks amused by them.

Also speaking of these two, they went to see a show at the park one day. I was kind of watching the show with them since an acrobat was performing, and all the sudden the performer threw up on stage in the middle of her performance! Every time I think I’ve seen the strangest thing there is to see in the game, I see something stranger. What’s really funny though is that it coincidentally happened right after she performed on her cyr wheel (an apparatus that spins a lot).

And now, what you all came here for, one night, I let all eight of my sims loose at the carnival! Here are some of the things that happened:

– I thought I was more of a Jacovine fan, but gosh damn it, Matthiott has totally stolen my heart. LOOK AT HOW ADORABLE THEY ARE WHEN THEY DANCE TOGETHER. (Meanwhile, Jacovine tried to dance, but Jacobin kept accidentally stepping on Levine’s toes and was generally a disaster at the dancing thing.)

– Jacobin convinced Levine, Matthew, Elliott, Pin, and Kreljoen to join him on the carousel (though I’m pretty sure Matthew and Pin didn’t need convincing, Elliott goes wherever Matthew goes, and Levine of course couldn’t say no to Jacobin). The carousel ride was better than I could’ve ever imagined. 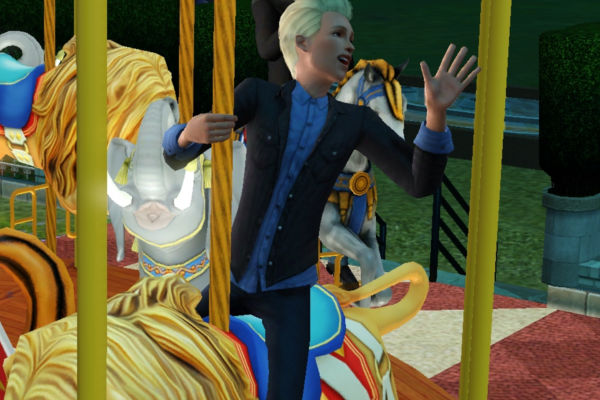 – I think Pin had the time of his freaking life, and Kreljoen looks like he has seen the face of God in this picture:

– There was also a rollercoaster! I don’t think Jacobin enjoyed it too much though.

-There were yummy snacks too.

– Some of them played whack-a-gnome.

– Alim even met a girl! She invited him a party at her house a couple days later too. Look at Alim getting his flirt on.

And it is now fall in the game, so Matthew and Pin are having a lot of fun playing in leaf piles. I even saw Alim playing in one when he thought I wasn’t looking 😉 I’ve also decided to have Pin’s hair change color with the seasons, just like the tree he’s named after (the Pin Oak), since he’s a plantsim (I know it doesn’t make sense that his hair would change from brown to orange, but he looks adorable as a redhead, so hush). He also has a vine tattoo that, in my mind, is magical, so I changed the color of the leaves to orange-ish as well.

And Now the Treat I Promised for My Jacovine Fans!

It’s a little scene between the two men that takes place after they’re already in a relationship. At the beginning, Jacobin is trying to convince Levine to let him use magic to make something that would let Levine walk in the sun. It didn’t come out how I wanted it to, but I tried. I’m literally only writing about my sims so that I can practice, so don’t judge me too harshly. I thought you all might still enjoy the interaction regardless of my writing skills. Also it’s a little *cough* sexy, so I’ll understand if anyone skips it, but there is no actual sex of any kind. So anyway! Here’s the scene, from Levine’s POV:

Jacobin leaned back against the kitchen counter. “You can just stick your hand out the window first to see if it works.”

“You do realize that sticking any part of my body in the sun could kill me, right?” Levine replied.

Jacobin smirked. “I could kill you too, but you still stick parts of your body in me.”

Damn it, he knew he was going to regret his words as soon as he saw the smirk. Still, he fought back a smile as he fumbled for a response. “That… that is not a viable comparison.”

“500 years old and you’re still terrible at comebacks? What have you been doing all this time?” Jacobin said, still smirking.

In the blink of an eye, Levine was pressed up against the other man, his face mere inches away. Jacobin’s gasp sent heat coursing through his body.

“Some of us have propriety and don’t turn everything someone says into something dirty,” he murmured, mouths so close he knew Jacobin could feel his breath with every word.

“Was that supposed to be an insult?” Jacobin replied, leaning back just enough to keep their eyes locked. One eyebrow was raised, giving him a look of playful defiance, but the racing heartbeat told a different story.

Levine slid his fangs out to their full length. His lover’s gaze snapped straight to them. He used one hand to grab Jacobin’s chin and paused, reveling in the way Jacobin’s body tensed, the way his hands white-knuckle gripped the counter, the way his eyes slipped closed.

“Well, you see, you don’t need vulgar words…” He trailed off and used one fang to prick the other man’s lip. “When you know exactly what someone’s weakness is…” He ran his tongue along the shallow cut and licked off a drop of blood. “And can simply render them speechless.” He finished his sentence and roughly ran his thumb over the scrape before letting it slip into that sensual mouth. He nearly forgot what he was doing when Jacobin started sucking on it. By the time he removed his finger, Jacobin’s hands were clutching at the fabric of Levine’s coat, his hard length pressing against Levine’s thigh, even through their clothes.

Levine flushed, pleased to know his actions were having the desired effect.

Ignoring the uncomfortable tightness in his own jeans, he slid his hand to the back of Jacobin’s neck, tangled his fingers into the golden hair, and yanked. “That was an insult.”

The response he got was nothing more than a soft moan and a twitch against his leg.

The vampire’s lips quirked up on one side. “Couldn’t think of a good comeback, huh?”

Levine let out a muffled sound of pleasure as his mouth was attacked with a hungry kiss. Payback gotten, he gave into his own desire to take that slightly swollen spot on Jacobin’s lip and suck on it until it turned bright red and bruised and made his lover dig nails into his back and beg for more…

Check Out the Rest of My Supernatural Sims Posts!

Yay for Jacovine finally getting together??!!
On a scale of 1-10 how badly do you want to go to a carnival with these guys now?
Do you like rollercoasters?

Announcement: I’ve Added a Gaming Category to the Blog!

Game Review: Tavernier by From the Bard

28 thoughts on “Sims Shenanigans: My Supernatural Sims House Update (2) (AKA The One in Which I Let All 8 Sims Loose at the Carnival)”